July 02, 2019
This is the book that really started it all in some ways for me. I'd been writing and publishing for eight years under my name. I'd written the Nikki Sands and Michaela Bancroft mystery series before DADDY'S HOME came out and I'd built a decent cozy mystery genre readership. I'd actually written Daddy's Home before MURDER UNCORKED came out because my initial intent as a writer was to be a thriller author. However, after sending Daddy's Home out on A LOT of unsolicited submissions I hadn't found representation and the idea for Murder Uncorked came to me...and viola...an agent loved it and sold three books in that series (two of them hadn't been written yet) in two weeks after signing me. Nine books in the two different series later both series were dropped and I found myself asking...what next?

It was about that time that Amazon started the KDP program for Indies and I had five manuscripts that hadn't been published and none of them were what readers would consider "cozies." What did I do? I came up with the pen name AK Alexander (after my three kids...Anthony, Kaitlin and Alexander), found someone to create covers for me, hired a good freelance editor (my Yoda...Mike Sirota) and published them on KDP. For a year I'd check sales daily and not much was happening. I was happy when I sold more than a book a day! And, then...one day it happened! And, I still have no idea how it happened but it did! I checked my sales and I'd sold A LOT of books in the UK of Daddy's Home. Then, Daddy's Home within two weeks in the UK went to #1 on the Amazon charts and I'm not talking #1 in a genre specific category, I am talking the #1 e-book on all of UK Amazon! It stayed there for a few weeks and then, Mommy, May I? climbed the charts and it was #2! Six months after that, Daddy's Home hit #4 in the US Amazon store behind the Hunger Games series. It is still the book that has outsold all 32 other books I've written or co-authored and I loved writing it. I can still remember sitting at my kitchen table writing that book...that was my desk at the time. That way I could keep an eye on two little boys who are now grown men, and a baby girl who is now a grown young woman!

I think my favorite piece of writing that book was developing Holly's character and the way she worked a tough case and still balanced being a single mom. In book #4 which will be out this fall, Holly's life has changed dramatically. As the lead up to DEADLY AFFAIRS release I thought it would be a good idea to post a few chapters from the first three books here on the blog. So, I'll begin where it kind of all began (at least for me becoming a thriller author). Hope you enjoy the first chapter of DADDY'S HOME.

WARNING!!! Not for young eyes or the faint hearted! It's graphic and there's language that some readers might be offended by.

If you haven't read the book before and like what you read, here is the buy link off of Amazon...https://tinyurl.com/y6l7zy3y

Here's the back cover copy for you:


They call him “the Family Man,” the cunning killer who preys upon single mothers and their innocent children, hunting for a family to call his own. But when they fail to meet his unyielding demands for perfection—and they always do—he kills.
Holly Jennings is the San Diego PD’s top crime scene investigator. She’s also a single mother struggling to raise her daughter alone and to dealing with her feelings for another man in the wake of her husband’s death. The Family Man case hits her hard—but even harder when her friend becomes his latest victim.
Determined to stop this psychopath once and for all, Holly delves deep into the investigation, combing through evidence for clues to his identity. But the closer she gets to the truth, the further she must venture down a dark path that could cost her everything: her family, her newfound love—even her life. This edgy page-turner is guaranteed to keep readers riveted into the wee hours of the morning. 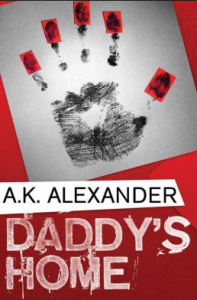 Daddy’s Home
by
A. K. Alexander

November 20, 2009
Michele was kind enough (or just not well thought-out enough) to ask me to blog with her. In another naive move, she gave me her password so I took it upon myself to screw with her blog and move everything around. Poor woman. Anyhow, I took a very formal survey on Facebook about which inane subjects the public would like me to address. Those View ladies have “Hot Topics” but I’m just going with “Lukewarm Topics That Have No Important Bearing on the World Whatsoever.” So by request, here are my thoughts on today’s pressing issues: Twitt er: There is no way to discuss Twitter without sounding vulgar. “I tweeted/twatted/twittered….” Any way you put it makes it sound like you’re busy getting yourself off. Which maybe you are, but I don’t want to know about it. And if I did want to know about it, I’d certainly want more than 140 characters of detail. Go the Carrie Prejean route. Live a little. The bigger problem I have is that Twitter confuses me because I can’t keep track of anyone, so
9 comments
Read more