May 08, 2019
Of all the books I've written, The Dead Celeb has received the most favorable reviews (4.8 stares on amazon), requests for more in the series and more readers e-mail me about this book than any other. So I thought it might be fun to post a chapter of it here every few days. Let me know if you want more of Evie and her cohorts (alive and dead)... 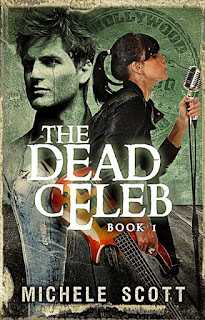 "Skirting the edge of gritty and glossy Los Angeles, Michele Scott takes paranormal mystery in a new direction with romance, humor, intrigue, and a fantastic leading lady. I can’t wait to read the next in the series." -Elizabeth Hunter, best-selling author of the Elemental Mysteries.

“A sexy irresistible supernatural mystery, mixed with a big cast of colorful characters. A fun, twisting plot worthy of Alfred Hitchcock that had me guessing until the very end (and guessing wrong I might add!). Michele Scott is a tremendous talent and The Dead Celeb is a helluva lot of fun to read."--J.R. Rain, bestselling author of Moon Dance and Vampire Games.

What happens when a small town girl moves to Hollywood to pursue her dreams and winds up smack dab in the middle of a murder investigation, haunted by famous dead celebs, and working for the biggest pop star in the music industry?

Introducing Evie Preston: Small-town girl and under-the-radar healer, currently trapped in a po-dunk Texas town but yearning for something more. When fate gives her the opportunity to move to Hollywood to follow her dreams, Evie finds herself navigating through the land of glitz and glamour, and the realm of (dead) celebrities…

Raised in Brady, Texas by her minister father and her beauty shop-owner mother, Evie has been trying to get out of town for years. When an old family friend gives her an unexpected gift on her birthday, Evie finally gets the chance to start fresh out west. Against her father’s wishes, she packs up her guitar, her dog, Mama Cass, and heads for California.

Once in L.A., Evie finds a singing gig at a local dive bar where she meets a slew of interesting characters including the owner himself, a former child star with a hidden past. She also scores a day job doing make-up for a famous and foul-mouthed pop diva. One of the job perks includes house sitting at a Hollywood Hills mansion. But what Evie doesn’t know is the house is also home to some famous celebrity spirits, including the essence of former Grunge rocker, Lucas Minx.

As if things weren’t complicated enough, Evie finds herself in the middle of a murder mystery and discovers she’s being targeted by some nasty spirits. And to top things off, she’s developed a Texas-sized crush on her hot, but very dead, roommate, Lucas.

Maybe her dad was right and the City of Angels really is the City of Devils—all of them after her.

DEDICATION
For you Debbie Rosen because you get it!
.

janny crocket said…
Ever since my husband got me divorced for the past 2 years, i v'e not been my self. I was reviewing some post of how i could get back my husband then, i saw a testimony shared by Marina Choas from SWEDEN about a spell caster named Dr. tunde. I contacted Marina Chaos to confirm about how Dr. tunde helped her and she clarified everything to me of how he helped her and that gave me the courage to get in touch with Dr. tunde for help. Dr. tunde assured me that my days of sorrows will be over within 48hours after he has finished with his work. I followed his instructions he gave to me because i had the believe, faith, hope and trust in him. Verily i say to you today that i and my husband are back together and i can proudly say and testify to the world of what Dr. tunde did for me. Contact him today via E-mail:(babatundesolutioncentre1@gmail.com) OR call him or whatsapp him  +2348143581382 if you seek his help.   Also specialize in treating all kinds of illness, HERPES VIRUS, HEPATITIS B, CANCER, BRAIN DISEASE, INFERTILITY, DIABETES AND MORE

July 02, 2019
This is the book that really started it all in some ways for me. I'd been writing and publishing for eight years under my name. I'd written the Nikki Sands and Michaela Bancroft mystery series before DADDY'S HOME came out and I'd built a decent cozy mystery genre readership. I'd actually written Daddy's Home before MURDER UNCORKED came out because my initial intent as a writer was to be a thriller author. However, after sending Daddy's Home out on A LOT of unsolicited submissions I hadn't found representation and the idea for Murder Uncorked came to me...and viola...an agent loved it and sold three books in that series (two of them hadn't been written yet) in two weeks after signing me. Nine books in the two different series later both series were dropped and I found myself asking...what next? It was about that time that Amazon started the KDP program for Indies and I had five manuscripts that hadn't been published and none of them were what re
1 comment
Read more