November 20, 2009
Michele was kind enough (or just not well thought-out enough) to ask me to blog with her. In another naive move, she gave me her password so I took it upon myself to screw with her blog and move everything around. Poor woman. Anyhow, I took a very formal survey on Facebook about which inane subjects the public would like me to address. Those View ladies have “Hot Topics” but I’m just going with “Lukewarm Topics That Have No Important Bearing on the World Whatsoever.”

So by request, here are my thoughts on today’s pressing issues:

Twitter: There is no way to discuss Twitter without sounding vulgar. “I tweeted/twatted/twittered….” Any way you put it makes it sound like you’re busy getting yourself off. Which maybe you are, but I don’t want to know about it. And if I did want to know about it, I’d certainly want more than 140 characters of detail. Go the Carrie Prejean route. Live a little. The bigger problem I have is that Twitter confuses me because I can’t keep track of anyone, so I write stupid things like: “Twitter likes to warn me that I’m having unprotected Tweets, but the f’ing condom won’t fit over the Mac. Even the lubed one." But it gets me re-Tweeted more than, “Um… I have a new book out. Please buy it so I can afford to go on the Rick Springfield Cruise next year.” (BTW, it turns out that being "retweeted" is a lot less pleasurable than it sounds.) Facebook is more organized and logical. This is why I have overpowering bouts of compulsively Facebooking important information about Bedazzlers and how many Coolattas I’ve had that day. Of course “Facebooking” sounds equally as pornographic as all the “Twit/Twat” variations, but at least it involves the face and not… Well, let’s move on.

Dancing With the Stars: I gave up watching this show because I have a nauseating vestibular reaction to neon orange spray tans. Also, if I want to watch people get injured I’ll just watch a hockey game. Or idiots on Youtube. Or student drivers.

Levi Johnston: There is no measure to the joy I get over Sarah Palin’s daughter’s baby daddy whoring himself out on Playgirl. He must love the ex-VP candidate as much as I do. Levi is a hot, craptastic mess and I can’t get enough. He’s so dumb, it’s adorable. I want a play-by-play of the Playgirl photo shoot. I 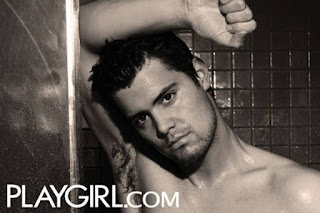 want to comb out his armpit hair. I want to move the hockey stick out of the way so I can see all that Alaska has to offer. I love that he has a handler named Tank who appears to have even fewer brain cells than Lusty Levi himself. But most of all, I adore the boy for (in his own inarticulate way) telling Sarah Palin to screw off. Hugs, little guy! Or big guy? Unfortunately, by all accounts, we won’t get to see visual evidence either way… But that’s what the imagination is for.

Heidi Klum’s desire to lose 20 pounds: Offensive and obnoxious. Take off the angel wings and you’ll drop the weight. On one hand I resent that someone as vilely goddess-like as she is would say something stupid about wanting to lose weight. On the other hand, I can safely say that I do not look up to her as a role model so I couldn’t care less if she barfs into the toilet five times a day.

Wonder Woman outfit changes from Season 1 to Season 2: First of all, I can’t say anything about this show without pointing out that my adored Rick Springfield graced the show with his acting chops. Click here for delightful clips of hottie rock God frolicking.

Now, here’s the failure with the costume from the first season: Lynda has huge knockers. God love her, they’re 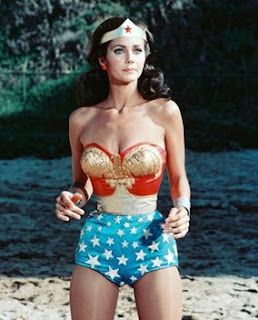 big. But the excessive gold splayed across her chest is just too obvious. And frankly icky looking. It just seems that she was constantly announcing, “My breasts and I will battle you and take your lassoed body into our invisible airplane!” And who the hell gave the poor woman silver wristbands when the rest of her accessories were gold? Clearly not a gay man. And the starred shorts were more Spa 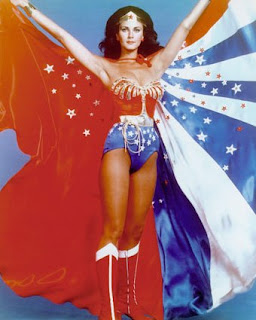 nx-looking than Wonder Woman deserved. By the second season they figured out that the subtle winged effect was more attractive cleavege-wise, that metals should not be mixed (gold matches gold), and that if you’re gonna have short shorts, they might as well not look like granny panties. And the cape is simply heaven.

I’d love to stay and chat more, but there’s a Levi photo shoot I have to research. And videos of Rick Springfield behaving inappropriately on Californication that I need to attend to. And let's hope my well-behaved mother doesn't find this post. Not that she'd know who Levi is, but still...

Jeff Cohen said…
See, here's where gender stereotyping rears its ugly head: I'm guessing men prefer the Season 1 outfit. We're not subtle creatures. And while we certainly appreciate the extra expanse of leg we get in Season 2, the cape is, let's face it, a little scary. And if you think one of us--ONE-- noticed the difference in bracelets, you clearly weren't watching our eyes as we paid rapt attention elsewhere.
November 20, 2009 at 8:44 AM

Jessica Park said…
Huh. I thought the Season 2 boobs looked more shapely than the gold blobs. And I bet the gays love the cape, Jeff... Wonder Woman appeals to all sorts of men for different reasons. :)
November 20, 2009 at 9:03 AM

Jessica Conant-Park said…
Getting people to spit out their drinks was precisely my goal. Filled with feelings of success!
November 21, 2009 at 7:12 AM

Anonymous said…
Searched for video and has casually originate the bulky archive of "vehement" :)
Has dared to interest all full duration :P
But they at times do not work :(
It is essential to update video the codec
[URL=http://xarchive.if.ua/pictures-of-american-teens.html]pictures of american teens[/URL]
February 17, 2010 at 3:49 AM

July 02, 2019
This is the book that really started it all in some ways for me. I'd been writing and publishing for eight years under my name. I'd written the Nikki Sands and Michaela Bancroft mystery series before DADDY'S HOME came out and I'd built a decent cozy mystery genre readership. I'd actually written Daddy's Home before MURDER UNCORKED came out because my initial intent as a writer was to be a thriller author. However, after sending Daddy's Home out on A LOT of unsolicited submissions I hadn't found representation and the idea for Murder Uncorked came to me...and viola...an agent loved it and sold three books in that series (two of them hadn't been written yet) in two weeks after signing me. Nine books in the two different series later both series were dropped and I found myself asking...what next? It was about that time that Amazon started the KDP program for Indies and I had five manuscripts that hadn't been published and none of them were what re
1 comment
Read more